Is Bled a Comedy?

One of my favourite authors is Jason McIntyre, whom I’ve had the pleasure of interviewing before. I’m thrilled he’s invaded my site again to give you a taste of blood with his newest release — Bled. Since it’s humour month on my blog, I’ve asked Jason to put a comedic spin on Bled.

Read and tell him if he’s succeeded. 😉

Blood is thinner than water: My new book Bled is a comedy?

But I have (so far) never been called comedy writer. Early reviews of my novella, Bled, have had a resoundingly positive vibe, but so many readers — particularly women — wanted to know, “It’s not about a woman’s time of the month, is it?”

Given the title and the cover art, and my history of trying new things with the stories I’m telling, I suppose it’s a reasonable question. After all, if you’re a woman who thinks that would be tactless, then you might like to know before you invest a couple hours reading a novella called Bled. “Is this thing gonna talk about my Aunt Flo and Cousin Red coming to visit from Ohio?” And if you’re a guy, you might be thinking, “Should I really be reading about this? I’m married. I’ve lived through it.”

Bled takes place in Dovetail Cove, the same island town where last year’s novella took place two years later, in 1974. That book was called Shed (sensing any vowel-chime here?) and while there was an actual shed in the story, it wasn’t really about that. It was about a lot of things, primarily about one’s ability to shed their past, shed the shackles of an outrageous fortune, etcetera, etcetera.

So I’ll say this about Bled. There’s at least a bit of the red stuff within the actual story. Does it have anything to do with your Aunt Flo from Idaho? Not a chance.

Hope you give it a read; hope it gives you the creeps. 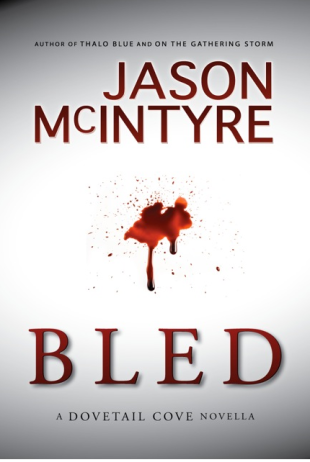 Bled: About the Novella

She only wanted to leave. But he took that option from her. Now she wants it back.

Set on the same island as the reader favorite Shed, the latest literary suspense novella from bestselling author Jason McIntyre picks up the Dovetail Cove saga with this story of one lonely woman…trapped.

Tina McLeod is on the cusp of a new life. Extraordinary change is rare in her world but this newsflash means she can finally leave her small island town for good. No more pouring coffee for townsfolk in Main Street’s greasy spoon, no more living under the weight of her born-again mother. That is, until Frank Moort comes in for his usual lunch and dessert on an ordinary Friday in May.

Bled sees things turn backwards and upside down for each of them. Their encounter is prolonged and grotesque, the sort of thing splashing the covers of big city newspapers. Both are changed. And neither will come out clean on the other side.

A story about taking what’s not yours, Bled explores pushing back when you’ve been pushed too far. It paints in red the horrors from our most commonplace of surroundings: right out in the open where nothing can hide behind closed doors and shut mouths.

About the Author
Jason McIntyre has lived and worked in varied places across the globe. His writing also meanders from the pastoral to the garish, from the fantastical to the morbid. Vibrant characters and vivid surroundings stay with him and coalesce into novels and stories. Before his time as an editor, writer and communications professional, he spent several years as a graphic designer and commercial artist.

McIntyre’s writing has been called darkly noir and sophisticated, styled after the likes of Chuck Palahniuk but with the pacing and mass appeal of Stephen King. The books tackle the family life subject matter of Jonathan Franzen but also eerie discoveries one might find in a Ray Bradbury story or those of Rod Serling.

Jason McIntyre’s books include the #1 Kindle Suspense, The Night Walk Men, Bestsellers On The Gathering Storm and Shed, plus the multi-layered coming-of-age literary suspense Thalo Blue.

Jason McIntyre was originally interviewed, June 24, 2011, for Inside the Author’s Mind.

Find Jason at his many sites below, and join me in congratulating him on the release of Bled. It’s definitely not a comedy! 😉