Inside the Author’s Mind – Nya Rawlyns

I’ve read that Nya Rawlyns is a hopeless romantic who revels in the dark, gritty world of urban fantasy and the paranormal. She loves action, almost as much as romance/erotica, and like me, she loves her women strong and her men good-looking.

One more thing we have in common—we live for words.  A multi-published author and editor, it’s my great pleasure to introduce Nya Rawlyns. 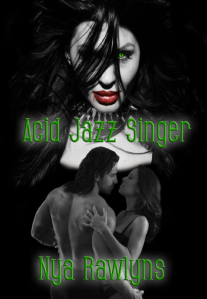 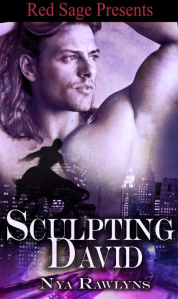 and she’s the editor of Dancing in the Dark: An Anthology of Erotica 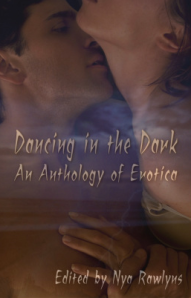 All e-books can be purchased from: Amazon Kindle

Acid Jazz Singer, Book One of the Hunger Hurts series IN PRINT

Dancing in the Dark: An Anthology of Erotica IN PRINT

What is your idea of perfect happiness? Right this minute? – an ‘a’ key that doesn’t stick. *Sighs* yes, she’s easily satisfied. At least by the small things.  In truth, this is not the easiest of questions to answer. It’s rather mood dependent and has a lot to do with fantasies swirling around a certain well-muscled, um, yes … well, nevermind.

What turns you on creatively? My muse. His name is Rowan, he’s what some Brit friends of mine call ‘a bit of rough’ <isn’t that, like, really perfect?>, and he is quite the demanding and attentive fellow when he chooses to visit – which fortunately for me is an almost daily occurrence <sometimes I have to beat him off with a stick and yes he rather enjoys that>. My son tells people his mother has an imaginary friend – little does he know. Other than Rowan, what turns me on are people. I watch and listen, voyeur turned full volume to absorb the sights and sounds, the rhythm and cadence of speech, furtive glances, body language – everyone has a story laid out like a patchwork quilt. I take those bits and pieces and weave the tapestry, channeling the characters, ferreting the truth of their emotions. In other words, I steal…

Which words or phrases do you most overuse? ‘Core’. His bulging manhood pressed against her flesh sending thrilling stabs of pleasure to her *core*. I did a ‘find’ in Word on some ‘scenes of affection’ and ‘core’ showed up so much I might as well have been writing a technical manual on deep well drilling techniques. Sheesh. Working on it.

What quality do you most admire in a man? Other than bulging manhood and well-muscled…?  I like guys, a lot. I admire their single-minded focus, their simplicity (not in a derogatory sense), their ability to cut to the chase. I like men who like women (not all do), assertive, confident men. Alphas. Okay, that’s a list, isn’t it? *Women do lists, it’s genetically encoded, so sue me.*

What quality do you most admire in a woman? I like that a woman can do the same job as a man and it takes twice the amount of work to prove she can but she goes ahead, never giving up and never backing down. That same woman is also a mother, a sister, a wife, a friend, a confidant, a teacher, a counselor, an activist and chief cook and bottle washer. She’s ‘Everywoman’ and the moral center of the family. It’s that trait I admire most and aspire to.

What is your greatest regret? That I didn’t record my stories earlier on in life. Oh, I entertained family and friends with short fiction but it took forever to decide to learn the craft … something that takes a lifetime to hone.

If you could change one thing about yourself, what would it be? Other than maybe being a tad more sensitive to others’ feelings <blunt and direct and brutally honest sometimes doesn’t quite cut it> I’d like a package deal: tall(er), blond(er), skinnier, way skinnier (OK, athletic works for me), and young enough to carry all that off but still have the smarts to know what matters in life. Really, is that too much to ask?

What is your greatest fear? I worry I’ll run out of time to do everything on my bucket list.

Which living person do you most admire? Since JFK I haven’t found many people worthy of genuine admiration – and of course, that sentiment was colored by my own youth and impressionability. Rather than a single person, I might nominate all those who devote their time and resources to stopping animal abuse, who work with no kill shelters to place worthy cats and dogs in loving homes, with the large animal rescue groups who perform the same service. This is my singular passion in life.

What profession other than your own would you like to attempt? Theater. Dance in particular. *Cue: younger, skinnier…*

If you could choose what to come back as, what would it be? A cat. With staff.

What do you consider your greatest achievement? That one’s easy … my son. *He’ll blush but it’s true.*

What is the trait you most deplore in others? Intolerance.

What is your greatest extravagance? It used to be shoes. Then it was handbags. Now it’s a good meal savored slowly and accompanied by good conversation, taking time to enjoy the moment.

What is one thing you want to do before you die? I want to wander the Scottish Highlands, far from the beaten path. I don’t know why, really. It’s just something I must do.

What is your present state of mind? Passionate: I’m a glass half-full, type A multi-tasker. All the time. And when I’m not, I can do angst with the best of them.

What are some of your favorite curse words? If it starts with ‘f’ and ends with ‘k’ … and every variation in between. I used to sail, I rode horses – colorful doesn’t begin to describe my, um, word usage.

What is your motto? I can ask permission later…

Thanks Nya for your delightful responses! Sailing and horses? I now understand where your colorful use of words comes from! Readers, please feel free to leave a comment for this multi-talented lady. 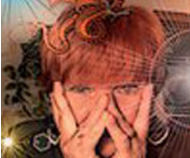 11 responses to “Inside the Author’s Mind – Nya Rawlyns”