Robert Chazz Chute is a funny man. I’ve only gotten to know him recently, and he’s a mix of satirical, dry, and outrageous humor. Listen to his podcast and you’ll know what I mean.

Who is that Chazz Man?

Robert Chazz Chute is the caffeine-fueled author of Sex, Death & Mind Control (for fun and profit) and Self-help for Stoners, Stuff to Read When You’re High and The Dangerous Kind.

His novels, This Plague of Days and Bright Lights, Big Deal and Sex, Drugs and Romeo arrive this year. 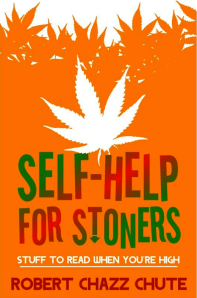 Find out where to buy all of Robert’s books on his site.

What is your idea of perfect happiness? Perfect happiness? Hm. I think that only flashes by fleetingly during peak experiences, say at orgasm and mid-pizza or losing myself in a book…any time I’m distracted from staring into the Abyss. I’m so screwed up, being happy reminds me to be sad.

What turns you on creatively? Weird facts. The other day a friend told me that alcoholism can be a side effect of a common anti-depressant. I immediately started wondering how I could turn that into a story. One of my stories from Self-help for Stoners is a revenge fantasy for divorced women everywhere that arose from a conversation with someone in the know about how to get away with the perfect murder. It made a great how-to chapter, I must say.

Which words or phrases do you most overuse? I, me, my. I’m embarrassingly self-absorbed. I was convinced as a kid that we live in a Logan’s Run world where a committee of old men, or God or scientists were somewhere behind the walls: watching, testing and judging. It’s a paranoid, narcissistic worldview. And probably true. It would explain a lot of the weirdness.

What quality do you most admire in a man? To be so comfortable with whom he is that he can forgo macho bullshit. Some guys are overly aggressive and do a lot of stupid things, like invade other countries or they try to dominate others. Those are men who are overcompensating because they’re worried they aren’t masculine enough. They bore me. When I was like that, I was boring, too. Now, I’m honest, which is much more interesting. Disturbed is interesting, right?

What quality do you most admire in a woman? I can’t narrow it down to one quality, but intelligence comes in even with grace. Those are the qualities I most admire when I get to know them, of course. From across a room, I’m like any other guy: Eyes first. Then lips…the exotic…breasts and the presence of lingerie tends to nab my attention. Mmm…what were we talking about?

What is your greatest regret? I went to journalism school. I should have gone farther afield for university…say Hawaii. Why don’t we all go to university in Hawaii? Also, I wish I’d gone to film school instead, but when I was 17, I wasn’t aware of all my options.

If you could change one thing about yourself, what would it be? My weight goes up and down. I really have to watch that. If I could, I’d change my metabolism so I could be one of those people who can eat anything, never gain an ounce and judge fatties for their metabolism. (Side note: Never listen to a personal trainer who doesn’t struggle with their weight. Otherwise, they’re just lucky assholes who don’t understand food addiction. “Why don’t I just drink more water?” Answer: “Because a mochaccino tastes like heaven, love and chocolate in a cup and it’s the only sure antidote to human suffering, that’s why!”)

Which living person do you most admire? My wife. I married really well. Janice is a psychologist. She works hard to save children from their parents. Also, it was she who first suggested I quit my day job and write and publish full-time. That takes a lot of love, faith and generosity. She’s the greatest person I know. Bonus: She’s a hottie.

What profession other than your own would you like to attempt? Writer/director. That goes back to the whole film school thing. I grew up working in a video store. I watched two movies a day for years. My superpower (which I can’t seem to monetize) is an eidetic memory for movie lines. My movies would look like David Lean’s work, have a Tarantino bent but with 40% fewer decapitations and more Kevin Smith-type dialogue.

If you could choose what to come back as, what would it be? I wouldn’t. The way is fraught with danger and too many variables. I got lucky being born into a relatively peaceful country. Timelines and alternative realities are wispy things and reincarnation is a very risky business. Reincarnation is a curse. It may be one of the most overrated things there is, like Jennifer Aniston’s acting or multi-grain cereal. Sure, you think you like Jennifer Aniston, but when she does that fake cry, hand to her mouth and looking away, she’s Rachel every time. And cereal? There’s way too many insect parts allowed in cereal for me to enjoy it properly.

What do you consider your greatest achievement? I’m tempted to say “my kids” but I don’t know if that qualifies as an achievement. Well…I did “achieve” orgasm to place the order so there’s that. Funny, I used to believe in nurture over nature. Then I had kids who seemed to emerge from the womb with their personalities and operating systems already installed. I thought I’d mold them in my image, but now I think all I can do is adapt to their demands.

On second thought, my greatest achievement is charming the mother of my children into thinking I was a great catch. If I couldn’t make her laugh, I’d be stuck in a job I hated, battling suicidal tendencies and trying to pay off two very angry ex-wives.

Also, as a healer, I did cure a bunch of people of their problems and I got a woman out of her wheelchair and walking again and living fully. It’s a long story that sounds fictional, but it’s true and strange. That was a different time in my life and now it feels like it happened to someone else.

What is the trait you most deplore in others? A lack of empathy. I’m a news and politics junkie and the root of all the problems I see is a lack of caring for other humans. Every time you say “Me first,” you mean, “Fuck you and your children. I got mine and I don’t care about your problems until they are my problems.” That’s no way to have a safe society. We have so many resources wasted on wars: War on Terror, War on Drugs, War on Biology, War on Common Sense. One bomber costs over a billion dollars. Those are dollars that could have been so useful in research on the things that really will kill us. A War on Cancer and a War on Heart Disease would save many more lives than 95% of our bullshit distractions. I’ll step down from my soapbox now. I know I can get obnoxious about grinding my axes.

What is your greatest extravagance? Acting on my dreams and living as a full-time writer and gambling everything on a future where the odds against success are so high. Doing what I do is like saying your retirement fund will be a lottery win. And the lottery is my back up plan. That is galactically self-indulgent of me.

What is one thing you want to do before you die? Do? Save lives. Be? I want to be successful as a novelist and to be seen, objectively, as successful. Critical acclaim wouldn’t matter much, but to have a lot of people buy my books and wait anxiously for the next one would be my pinnacle.

What is your present state of mind? Harried. If I’m conscious, I’m thinking about what I have to do next. I can disappear into writing for a while, but when I’m done writing, there’s still so much more to do. I write and revise and market every day. Every week I have a new podcast (Self-help for Stoners on iTunes.) I have three blogs, three Twitter accounts and a publishing empire to build. The other night I was one the phone with my book designer in the States while on iChat with my cover designer in Scotland and juggling the printer’s specs. I’m not whining. It is exciting to me. However, I do need to set up an intravenous by the desk to get some nutrition and my new desk chair is a toilet.

What are some of your favorite curse words? In my internal monologue, there’s a lot more swearing. “Fuck” is flexible grammatically and powerful because of its monosyllabic construction and sharp end consonant. In front of the kids, I have to be more circumspect for a couple of more years. “Dick Cheney!” is a good one. Sometimes I go mythological: “By mjolnir, Hammer of Thor!” “God’s eyebrows!” is a good back up when the kids are in the car and I’m cut off in traffic. Inside it’s all “Fuck-fuck-fuckety-fuck basket!” like I’m Colin Firth in The King’s Speech trying to cure his stutter. Yeah, I’m always trying to cure my damn stutter.

What is your motto? Question Authority before Authority questions you.

Thanks Robert  for your fun responses!  Readers, please leave a comment or ask a question of this witty author. 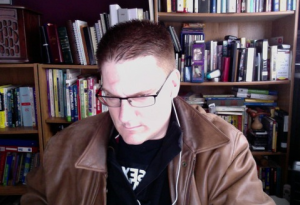 19 responses to “Inside the Author’s Mind – Robert Chazz Chute”