Author Chris Rose and I have crossed paths on several writers’ groups, and I’m happy to finally have him on my blog.

He has a sense of humor, and I think you will enjoy his interview. Please learn more about Chris and all he has to offer.

Welcome Chris! Let’s start with a personal question. How would your best friend describe you in 20 words or less?

Shy & outgoing. Black and white. Yin and Yang. And on it goes. But passionate always. Oh, and charming (cough).

Sweet. Are you a full time writer or do you have a day job?

I’m a translator, for now, which, ideally, when the good work’s there, is much the same as writing – it is, indeed, re-writing, rather like editing someone else’s work – so I flit between the two, theirs, mine, theirs, mine…

Sounds like great work for a writer. What part of the world do you live in?

I live in Norfolk now, Norwich, Europe’s centre of all things literary, and I LOVE it! For its sense of community; for its beautiful coastline, and for all its many cultural and historical aspects.

What is your biggest extravagance?

My clothes. I’ve always been a bit of a dandy.

If you could change one thing about yourself, what would it be?

Well, I’ve recently read a quote by Helen Mirren, at 70, where she says that if she could go back and advise her younger self about how to deal with people, day to day, there would be many more ‘F*ck offs’ in there. I was brought up to employ the old stiff upper lip, and to not let the bastards see they were grinding me down, and to get through matters on wit. Which isn’t the way to go about things.

Helen Mirren is wickedly beautiful and I love her. What profession other than your own would you like to try?

Be a member of the S.A.S, anything that makes me feel alive. May sound silly to compare the two but that’s why I do theatre.

What is one thing you want to do before you die?

Other than indulge in quite a number of sexual fantasies, all involving willing participants, I’d say get my Italian up there with my French and Spanish.

It’s wonderful to know many languages. Do you have favorite curse words, in English or any other language?

If they can be classed as curse words this day and age, I love the old British working class ‘bleedin’’ this and that – ‘Shut up, ya silly bleeder!’ That kind of stuff, very dry and genuine. But I tend to swear in French most of the time, and so get away with it now: you know, like, ‘Putain de bordel de merde !’ I say get away with it, but I can get caught out sometimes.

How about a motto you live by?

I have so many, as trite as they sometimes sound, but I think ‘Nothing ventured’ holds very true.

What do you consider your greatest accomplishment?

My good lady and kids aside, my having become tri-lingual to native level in French and Spanish, having started late on in life, from scratch. It’s what seems to impress people, although I never initiate the question; it’s always due to their curiosity, no cats involved.

🙂 What makes you REALLY laugh?

Wow, where to start! Nothing too intellectual, and it always tends to be quite visual; and it’s something that can catch me completely off guard, all very reactionary and natural. Very basic.

Let’s learn more about the writer in you, Chris.  Where do you draw your inspiration from?

Memory, mainly, I have quite a vivid memory. It’s strange, but I think somewhere, deep down, I always knew I’d become a writer, and it’s as if I’d subconsciously record stuff, from situations right down to something somebody said. And I can go back decades on those alone.

And then there are books I’ve read of course.

What motivates you to write?

The previous question, I think. It’s a need to purge, like most writers, I imagine.

What is the best advice you’ve received as a writer?

To write for me, not some 23 year old agent. Or publisher. Hence why I love the route I’ve taken and wouldn’t change it.

Name a few of your favorite authors and books, and why you like them.

The question I feared. Albert Camus. F. Scott Fitzgerald. Truman Capote. Kurt Vonnegut. Christianne Rochefort… I could go on, and on.

Yes, it’s always hard to choose just a few. How do you market yourself?

Twitter and Facebook, generally. I mean to do more by putting myself about with the paperbacks, but life keeps getting in the way.

Do you do much research for your books?

Very little. I write about what I know about. Based on what I like to read personally. I’ve yet to attempt some new area.

What are your favorite and least favorite parts of being a writer?

I love the editing part, it’s what I call the real writing, even when it means deleting chunks of text; in fact, I love that part most, clearing away the debris.

The least favourite is the few days after a book has come to completion, and I feel a little lost.

I can relate to that. It’s the anti-climax. Define your style of writing.

Different. Original… hopefully. But to place it somewhere I’d go for poetic prose.

Is it important for you to know the title or ending of a book before you write it?

Fantastic question. The title of a book works as a wonderful catalyst for me. I base a book around it. For the ending, no, that just writes itself… as long as it isn’t a happy one, I don’t like those.

Do you outline, plot and structure, or do you just sit down and write?

The second option. Or rather I sit down and bleed 😉

So true! Do you have a set schedule for writing?

Not really. Whenever it’s quiet, mainly. And if the muse isn’t there, I don’t. No rush.

What is your best advice for new authors?

Be you. There’s room for us all. And read when you can.

What are some of your “must-have” tools for writing?

A thesaurus – sometimes, that is; I don’t like repeating words when I can help it. And my guitar.

Ah, a musician, nice. What is the name and genre of your latest book?

The latest is called Nancy Boy: for one year only…

Although genre is always a tough one with me. Let’s call it ‘contemporary, introspective, family drama, and romance – there are many more, I’m sure, I like to give value for money (cough).

Yes you do! Let’s  learn more about the book. 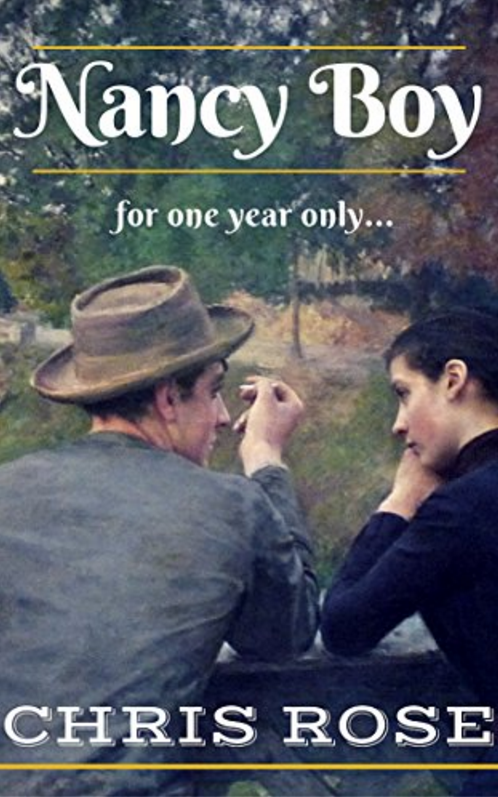 Why should people read Nancy Boy?

Because I like to face taboo issues. Or maybe issues people don’t even think to write about, hopefully. They can then, perhaps, find themselves in my books.

How long did it take for you to write it?

Off and on, about two years – with quite a few offs.

What inspired you to write it?

How are you marketing Nancy Boy?

More of the above, really. Which is quite difficult in a paranormal romance dominated world. But as long as someone reads it, I don’t mind… (sniff).

How did you celebrate when you finished the book?

I stopped drinking. I tend to celebrate during.

Ha! Okay. What has the reception been to it?

Great. Initially. And then zilch. Which at least goes to show I have a fan out there (another sniff).

What is the biggest lesson you’ve learned from writing Nancy Boy?

What makes your book stand out from the crowd?

What is the best way for someone to support your book, aside from buying it?

What is next for you, Chris?

I’m hoping to write a number of flash fiction stories, perhaps based around the same novel.

Excellent, let’s finish with a fun lightning round!

Aside from people/pets, what is the ONE item you would save if your house was on fire? My cashmere coat.

Favorite place you’ve traveled to or would like to travel to? I love Cortona, in Tuscany. But I guess my heart will always be in France.

Name a food you can eat every day. Eggs.

Salty or sweet? I swing both ways.

Coffee or tea or something else? COFFEE !!

The best gift you’ve ever received? A boy and a girl.

Your most guilty pleasure. Chocolate and banana crèpes – that’s when I’m anybody’s…

Name something you cannot go a day without. A cuddle… (please!)

Ps: sorry, but my original website no longer exists (long story, & one I’ll no doubt write about in 20 years or so), so what you have at the moment are the splutterings of a new and basic blog. But just you wait, folks !!

Got it! Thanks again for sharing of yourself with my readers, Chris. It’s been a pleasure to learn more about you. 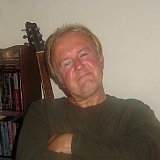 Born and bred in the city of steel: Sheffield.

Spent – or misspent, whichever your viewpoint – the majority of his ‘young’ years on the Northern Soul circuit. It’s around this time and place that his novel is set – ‘Wood, Talc and Mr. J : We never had it so good’, which is the 1st in the ‘The Rowlings Years’ series.

His academic education came much later, from scratch, in a sense.

In time, he fell in love with the idea of languages, French in particular, and went on to get a BA Hons in French Language and Literature with subsidiary Spanish, at The University of Sheffield. He was a ‘mature student’, though maybe not as mature as he would like to think, looking back…

After which, he moved down south – mid 90s – and eventually further still to the South of France for a few years, where he taught English. He then moved up to northern France to do much the same thing.

But it was here where he also began to write, or experiment with writing.

He came back to England in the mid-00s and lived in North London for five years, teaching and writing again.

And for the last four or five years, he’s lived in Norwich, where he’s completed a Masters in Literary Translation, at the UEA – he likes to believe he’s most definitely mature now!

He’s now working his way toward making a living by writing, with a little translation on the side…

He tends to be picky about books, and take his time reading them; he expects each word to count; something he can go back to, read again – and again. Things witty, satirical, poetic… Moving. Favourite writers of late? Maybe Markas Zusak. Anna Funder, her ‘All That I Am’. Actually, he’s only just discovered Kurt Vonnegut, and read ‘The Slaughterhouse Five’.

Soulful writers, and their soulful things. And maybe he tries to emulate them.

Same goes for his taste in films, music… and people