This is part two of a three-part series on Cuba. If you missed the first one, you can read it here.

I’m currently back in the deep freeze of Toronto, but it wasn’t long ago that Darcy and I felt the heat of the sun on our cheeks. Here we were on the balcony of our room with the ocean behind us. Ahh … what a wonderful sound that was! 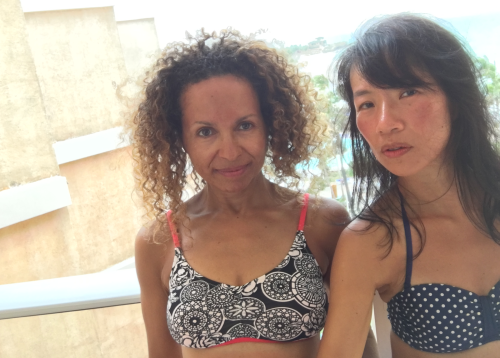 In part one, I covered three of the four plazas in Havana. The last one is Plaza Vieja. 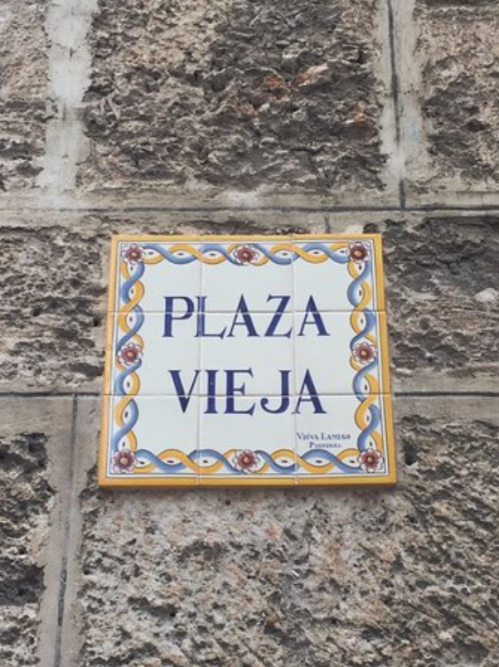 This plaza was originally called Plaza Nueva (New Square). It emerged in 1559 as Havana’s third open space after Plaza de Armas and Plaza de San Francisco. Plaza Vieja was the site of executions, processions, bullfights, and fiestas, all witnessed by Havana’s wealthiest citizens, who looked on from their balconies.

The urban architecture of Plaza Vieja is represented by colonial buildings and has always been a residential rather than a military, religious or administrative space. 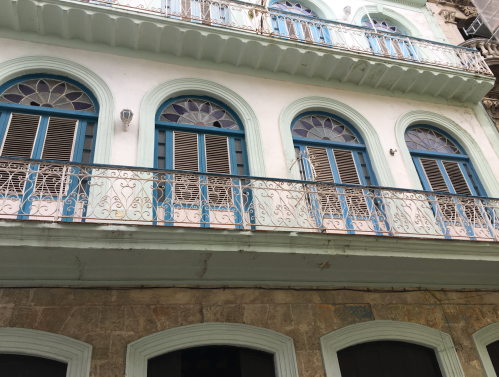 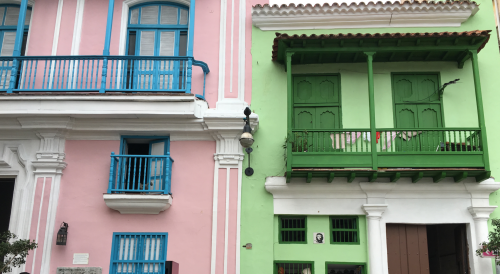 A work called “Viaje Fantástico” by Roberto Fabelo is found in the centre of the square. The figure, made of bronze, was donated by the 2004 National Arts Award winner. Our guide, Blexie did not know the history behind the monument, but it appears it was placed in the square in 2012.

I loved the piece immediately. A naked woman wearing only heels sits atop a rooster. What’s not to like, really?

She is unashamed of her nakedness, and she seems quite happy riding a cock. That she carries a fork is perhaps a symbol of her voracious appetite.

This is just my interpretation, of course. 😉

Cuba is known for its vintage cars, and there is an estimated 60,000 American cars still driving through the streets. Since 1959, when Fidel Castro assumed power, the majority of Cubans were forbidden to import foreign cars and parts. So, for almost 60 years, Cubans have played the role of Dr. Frankenstein, pulling parts from old American cars and replacing them with custom parts to keep their vehicles on the road.

There are no “new car dealerships” in Cuba as we know it. Cars are resold privately or passed down from one family member to another. 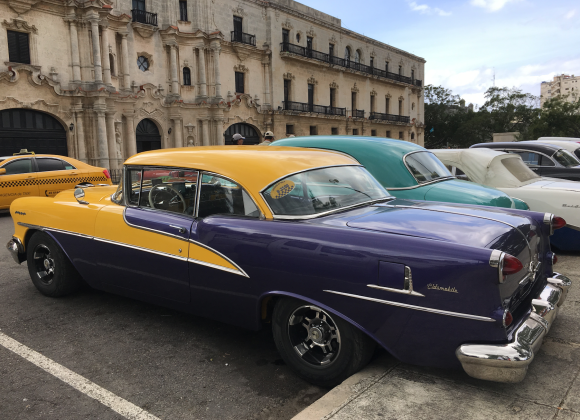 Interesting fact: The shortage of cars and public transportation has made hitchhiking a must in Cuba. We saw many hitchhikers along the way when going to and coming back from Havana. It is expected that “non-taxi” vehicles must pick up people needing rides. Hitchhiking is considered a safe way to travel. 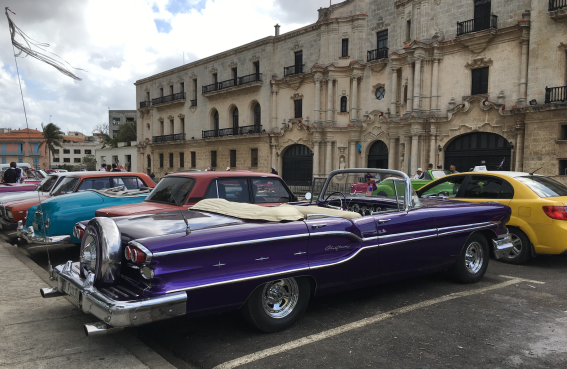 I know little about cars. For me, it’s a mode of transportation to go from point A to B. Still, I can appreciate the beauty of an American car that has lasted for more than 50 years.

On any given street, you can see a Skittles bag of shiny chrome and its proud owners standing nearby. 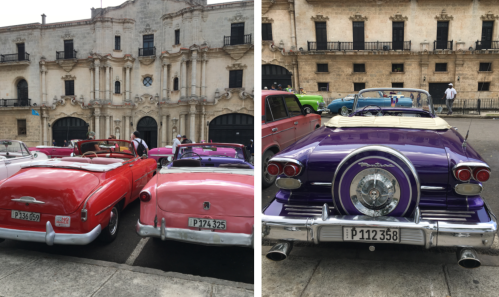 This shiny green car was my favourite. We drove in it for a short trip before switching to the blue and white Ford in the background. I liked the car because I own a dress that very same colour. 😉

John Lennon in Havana and the Beatles Bar in Varadero

When Beatlemania swept the world, Cuba resisted. Fidel Castro banned Beatles music in 1964 in an attempt to stamp out decadent, capitalist influences. But in 2000, Castro unveiled a bronze statue of John Lennon on a park bench, while Lennon’s “All You Need Is Love” played in the background. The ceremony took place on the twentieth anniversary of Lennon’s death.

Castro’s change of tune resulted from re-imagining Lennon as a political dissident and revolutionary. The statue, which captures Lennon in his long-haired, anti-war activism years, sits on a bench in John Lennon Park. Its iconic circular-rimmed glasses have been stolen so often that a guard now stands nearby holding them, poised to place them on the statue’s face when visitors approach. (The guard did so for my picture, too!).

We also went into downtown Varadero where there is an entire club dedicated to the Beatles. We didn’t stay for a set but snapped a picture of the fab four. They all looked oddly disproportionate. Still, the best likeness was John. 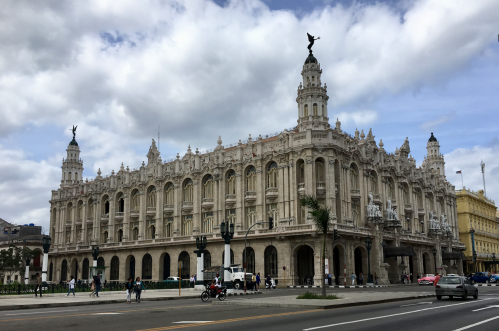 Across from Parque Central, the Tacón Theater was inaugurated in April, 1838. At the time, this was Havana’s most important theatre, known for its elegance, comfort, and exceptional technical abilities.

Years later, in 1914, the theatre and the buildings around it were purchased to build the Centro Gallego, which took up the entire block. Inside, the old Tacón Theater was remodeled, integrating it with the new elements.

The façades of the building are decorated with sculptures, stone adornments, marble and bronze works. The front features four groups of sculptures in white marble representing charity, education, music, and theatre.

Today, the theatre is home to the Cuban National Ballet, and on its main stage, to the International Ballet Festival of Havana.

While in Havana, both Darcy and I wanted to experience as much of Hemingway as possible. It wasn’t easy for our guide to squeeze it all in. We had to sacrifice a traditional Cuban lunch to do so, but it was definitely worth it. 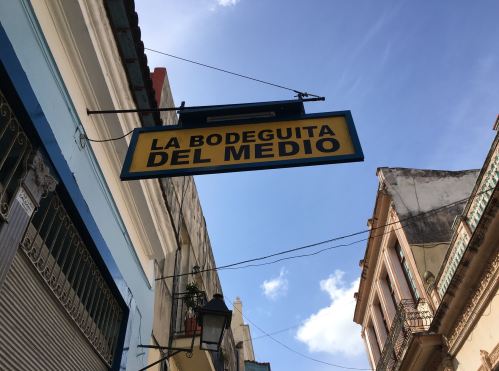 La Bodeguita del Medio is a restaurant-bar opened in 1942 and is famous for its celebrity clientele. Pablo Neruda, Salvador Allende, and Gabriel Garcia Marquez are cited amongst its patrons. It also lays claim to being the birthplace of the Mojito.

We walked in and a live band was playing to a packed house. The place has both spirit and history, evidenced by the graffiti and memorabilia.

According to the founder of the bar, Ernest Hemingway was not a regular, but there is a framed inscription that reads “My mojito in La Bodeguita, My daiquiri in El Floridita” attributed to Hemingway.

El Floridita is a historic restaurant and cocktail bar, famous for its daiquiris and for being a favourite hangout for Hemingway.

Other famous customers included poet, Ezra Pound and British novelist, Graham Greene, author of Our Man in Havana (written the year before the Revolution).

The bar is located a short walk from the Hotel Ambos Mundos where Hemingway maintained a room. Today, El Floridita contains many memorabilia of the author, and in 2003, a life-size bronze statue by Cuban artist, José Villa Soberón was created of Hemingway slouched at the corner of the bar.

I hope you enjoyed this second part of Cuba told in pictures and prose. I will post the last instalment later this week, which will focus on Hemingway, some of Cuba’s people and customs, and things you may not have known about Cuba.

As always, thanks for reading. ♥

The series is complete. You can now read Part 1 and Part 3.

18 responses to “Cuba told in pictures and prose (Part 2)”