The prompt for the latest episode of R.B. Wood’s Word Count Podcast asked that we use the month of May and the picture below in our settings. Of note, R.B. Wood took the picture with his i-Phone while on a cruise in Boston Harbour. He also contributes a story to this podcast! 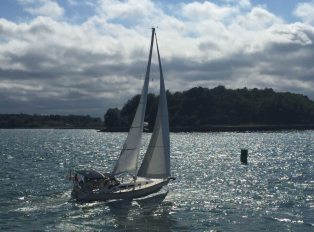 This was a hard one for me. I know nothing about sailboats, and taking a cruise is not my idea of a vacation, though I have taken short sightseeing excursions at sea. With that in mind, I had to conjure up an interesting story premise. As I usually like to write about relationships, love, death, and include a twist ending, The Fury of Poseidon materialized.

I didn’t intend for this to be a cautionary tale, but it ended up that way. I even learned a thing or two about sailboats!

You can also listen to me reading the story on episode 66 of R.B. Wood’s podcast.

Debby was getting married, finally.

When I introduced her to James a year ago, it never occurred to me that they would hit it off so well. Amongst our group of friends, Debby was the only one not married. Most of the time, she seemed happy to be single, but there were moments when she confided in me that she didn’t want to be alone forever. Those moments were rare but telling. It let me know, that as her best friend, I had to set her up as often as possible.

Jim, as Debby called him, was that rare combination of good looks, manners, and humility. Financially secure as a senior partner in a law firm, he had grown children from a previous marriage. Debby was never the maternal type, and she was past her childbearing years anyway. The match was perfect.

With James, she catapulted into a whole new sphere of experience. Debby had never known a luxurious life. She earned a modest living, and though generous with friends, she rarely spent on herself. Her hairstyle was the same as it was twenty years ago, her clothes purchased from second-hand stores. Underneath the dull exterior was a brilliant gem, but most men never bothered to scratch below the surface.

James did, and it renewed my faith in all men.

Debby invited her bridal party for a week to Curacao to thank us for helping her plan the wedding of her dreams. It was an all-expense paid trip for two bridesmaids and for me, her matron of honour. We could not get away from our husbands and kids fast enough!

Debby had been to Curacao once before when James flew her there at Christmastime. It was then that he proposed to her on his boat. As an added surprise, he even renamed the boat after her.

James arranged for us to stay at his property on the Dutch Caribbean island. We had exclusive use of a butler, maid service, and his yacht. On our second day in paradise, we lounged on the deck of the eighty-foot boat drinking wine and snacking on Dutch cheese and smoked sausage. As we drifted in the middle of the ocean, the sun played hide and seek behind large clouds.

The boat’s captain, Miguel, was a character out of the movies. His coffee-coloured skin contrasted boldly against gold-hooped earrings in both ears. Deep lines etched his face like scars, making it difficult to tell his age. He could have been forty or sixty. Only his incessant smile softened his expression.

“Did you know that according to legend, every boat is recorded by name in the Ledger of the Deep and is known personally to Poseidon, god of the sea?” Nicole said. She was the nervous bridesmaid of the group, having never set sail before this trip.

Debby laughed as she poured herself another glass of white wine. Her freshly manicured pink nails shimmered in the sunlight. “Nikki, for someone who’s never sailed, you know a lot about this!”

Nicole shrugged. “It helps to know a bit, makes me feel less anxious, but I did learn it’s bad luck to rename a boat without purging its name and erasing it from Poseidon’s memory.”

“Yes,” Debby said, “Jim knows all the sailor superstitions. We had a small ritual on the boat, but to erase every trace of the old name from it is a bit much.”

“What was the old name?” Nicole asked.

Debby made a face and pointed out to sea. “You see those fish?”

Far off in the distance, grey marine creatures arced high above the ocean and splashed gracefully back into the water.

“You mean dolphins? They’re not fish, you know. They’re warm-blooded and they’re mammals,” I said.

“I know, I know.” Debby swatted the air with her rosy nails. “Well, for some reason, Jim named the boat Dolphina after his favorite dolphin.” A puzzled look crossed her face. “How he can tell one dolphin from another is beyond me.”

We laughed, but Nicole remained serious.

“Do you ladies want to go swimming with the dolphins tomorrow?” Debby asked, “It’s kind of the thing to do around here.”

Jane, the other bridesmaid and also Debby’s cousin let out a sigh “I’m just as happy to spend the day swimming or on the boat. I need to work on my tan, that’s … if the weather co-operates.” A gust of wind whipped her long, red hair straight in the hair.

“I can’t believe how dark it is. What happened to the sun?” Nervous Nicole wrapped herself in a mesh cover-up. The warm ocean air suddenly cooled and goose bumps popped up on my arms.

“This is strange for the month of May, look like it might rain,” Miguel said. He stood at the helm eying the horizon. The sails flapped wildly and the boat began to rock.

“What do you think, Miguel?” Debby raised her voice above the rising howl of the wind. “Should we head back?”

Miguel was already on the move, busy reefing the mainsail. “Yes, Ma’am. We best get back to shore. The wind will give me resistance, so it will take time.”

“How much time?” I asked, sensing panic in Miguel’s voice.

At that moment, Debby arose from where she sat just as the boat hit a choppy stretch. She fell to her knees. Before she was able to stand up, the boat pounded down on another large wave and loose gear slid from one side of the deck to the other. Nicole and Jane screamed. That was right before water slapped me in the face so hard that it momentarily blinded me.

At Debby’s funeral, I overheard the words “shocking” and “unbelievable” used over and over again. When I delivered the eulogy, I had to come to grips with the events of that day. According to Miguel, a dolphin, larger than one he had ever seen, shot into the air at the stern of the boat just as Debby stumbled blindly to find her balance. On its descent, one of the dolphin’s fins struck Debby as she was getting up. She suffered multiple skull fractures from the impact and never regained consciousness.

Part of the dolphin’s body also crashed against the boat before falling into the water. No doubt it would have been injured, but a search for it turned up nothing.

It was a freak accident, surreal, in fact, yet I could not ignore that perhaps we had offended Poseidon, for immediately after that incident, the sun re-appeared and the winds died down to a gentle breeze for our solemn two-hour sail back to shore.

Thank you for reading and/or listening. Feel free to leave a comment or question. Feedback, whether good or bad is always welcome.